Seeing I had a bit of a run in the other day with a rude, facing-off 'old man Chav'. I'd thought I write a little story - with that theme in mind. 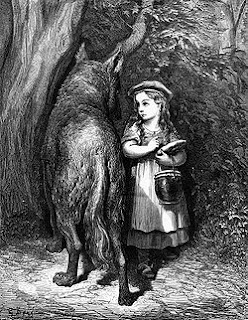 The warm sun sprayed UV rays onto her freckled face, and the wash of sea-waves touched her toes. ‘Little Red Riding Hood’ danced on the beach, without a care in the world. Insurmountable effort was not needed to take away her concerns. But suddenly, the crunch of pebbles, and the scattering of dog’s feet pulled her attention to a revolting man hastening towards her. He had a snarl on his face, stretched features, which matched his hideous Staffordshire bull terrier’s. Hood glared with disdain; she touched her left arm, it was sore, the sun had dealt out sunburn once again. Next she turned about face, straight into a smell of salt and chips and frazzling burgers. Then a bedazzlement of gulls and sand turned into a whirlpool of illusions. There were gulls everywhere. Waddling along the promenade. Gliding in the sea. Perched on the railings. Dive bombing for fried chips. It was like a scene from ‘Alfred Hitchcock’s The Birds’ movie.

Then barks carried in the air like monkeys and Hood began to run. The breeze was behind her, pushing, charging at her like a wild hose. In eye flicks and hazy vision the unkempt amusement arcade approached. A drunken man kicked the rabbit machine outside and a trashy old woman threw up her afternoon’s booze onto the pavement.
‘Your disgusting,’ cried Hood. ‘Jus’ PUSHOFF!’ said the old woman. ‘It’s my money. And if I wanna get out of my face, it is no one’s business. Except my own.’
‘If I had your face like yours,’ shouted Hood, ‘I’d wanna slap it.’
‘WHAT’D YOU SAY!!!’ Hood smiled and beat a hasty retreat into a side street; bypassing the dog’s crap wedged into the pavement like soft cement: Oh, I do like to be beside the seaside.
Abruptly, Hood, felt light-headed, like she had undertaken ECT, (Electric Shock Therapy). Then a pullback vision spun her around on the spot like a whizzing top, and suddenly, she came face-to-face with the old woman - insulted but a minute earlier. The old woman’s frame seemed different. Unsettling. It began to expand and elongated features had transpired: a metamorphosis, an identity shift had taken place from under the white haired wig. Hood gasped and she tiptoed like a ballerina to get a more precise view.
‘My, what a strange nose you have,’ she said.
‘All the more to smell you with,’ intimidated the creature. Its heavy breathing and wheezing had disturbed a tomcat nestling on the wall.
‘My, what big ears you have,’ inquired Hood.
‘All the more to hear your insults.’
‘My and…’
‘AHHH SHUT UP!’ said the creature. ‘Incidentally. May I present my true identity to you.’ In an instant, trails of rainbow beams and a dispersal of fluffy wool revealed a wolf, an unassuming creature with human traits - and pungent body odour - as potent - as a wretched Chav’s. Hood placed a hand over her mouth and nose. She winced and shook her head:
‘OH my God.’ Her heart thumped. Nervous sweat trickled in threads down her forehead. But before she could take her next breath, in an instant, the wolf had vanished, and in its place sat only a wig and a 'can of cheap-brew-cider'. Now, had the wolf been real? And had it really existed in the flesh?

****
Time shifted, and this reality had but only existed in a small storybook. A mother slowly closed ‘the book’ and kissed her daughter on the forehead, in a bedroom, somewhere in upmarket London.
‘That’s enough stories for one night. Go to sleep. Rest. Stories can be whatever you want them to be, honey.’ The daughter smiled, her puffed lips touched her silk pillowcase, accompanied with warm breaths. Next her eyelids closed, leaving only the hair of her lashes to twitch, then to become still as her mother exited the scene.
Text Copyright (c) NT 2013