Well after an intensive few months I have written the first draft of my new novel called 'Tabitha Bates'.

It is about a man, called Jonathon Mayhew, who obtains an antique chair by free means - and takes it back to his home.
Suffice to say after a few days strange paranormal events and visions appear to him, preying on his various phobias and fears.
An old lady, Tabitha Bates, owned the chair previously - and has ghostly powers at her disposal. Furthermore, Tabitha Bates is the main antagonist as the story builds apace.

I have designed a first draft book cover - to give a rough idea on the substance of my novel.

Hopefully 'Tabitha Bates' should be out in the late summer or autumn of 2016. 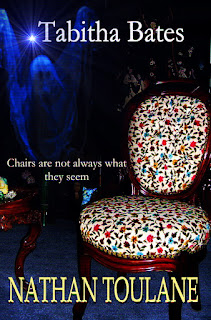 Posted by Nathan Toulane at 16:57 No comments: Links to this post