Slaves To The Generals: Book Giveaway

Enter if you want to win a copy of my novel.

Good luck!
Link here
Posted by Nathan Toulane at 15:32 No comments: Links to this post

I laughed most furiously at Derek Acroah the psychic other day (yes I’ve seen him live, and he was bloody awful) on the 'Most Haunted ghost show' yelling 'Mary Loves Dick.'

The spirit he’s supposed to be contacting is a one Dick Turpin. A notorious highwayman; alive and rampant in 1652. He was a bit like an English version of Jesse James or Billy The Kid. 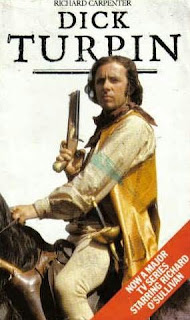 Most people think Turpin was glamorous, a bit like a Robin Hood figure: it’s totally fiction of course. He used to rob and steal from the rich and poor, then give it all to himself or corrupt landowners, who’d do his bidding in cattle rustling, or some horse fiddling scam. Eventually Turpin was caught under the guise of a false name and hanged in York.
Posted by Nathan Toulane at 15:35 No comments: Links to this post