I went away last week to France and saw the Bayeux Tapestry. It's an exhibit I have always wanted to study. It tells, with a eleventh century depiction, the battle of Hastings in 1066. The skill of the medieval embroiders is amazing. The tapestry is rumoured to have been made in Canterbury, England, and shipped over to Normandy, but who knows what the truth is. 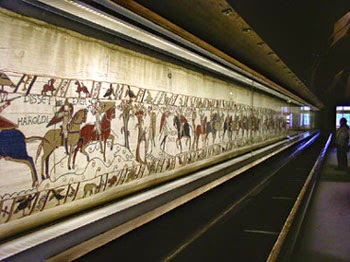 After that I went to the beautiful Cathedral in Bayeux. 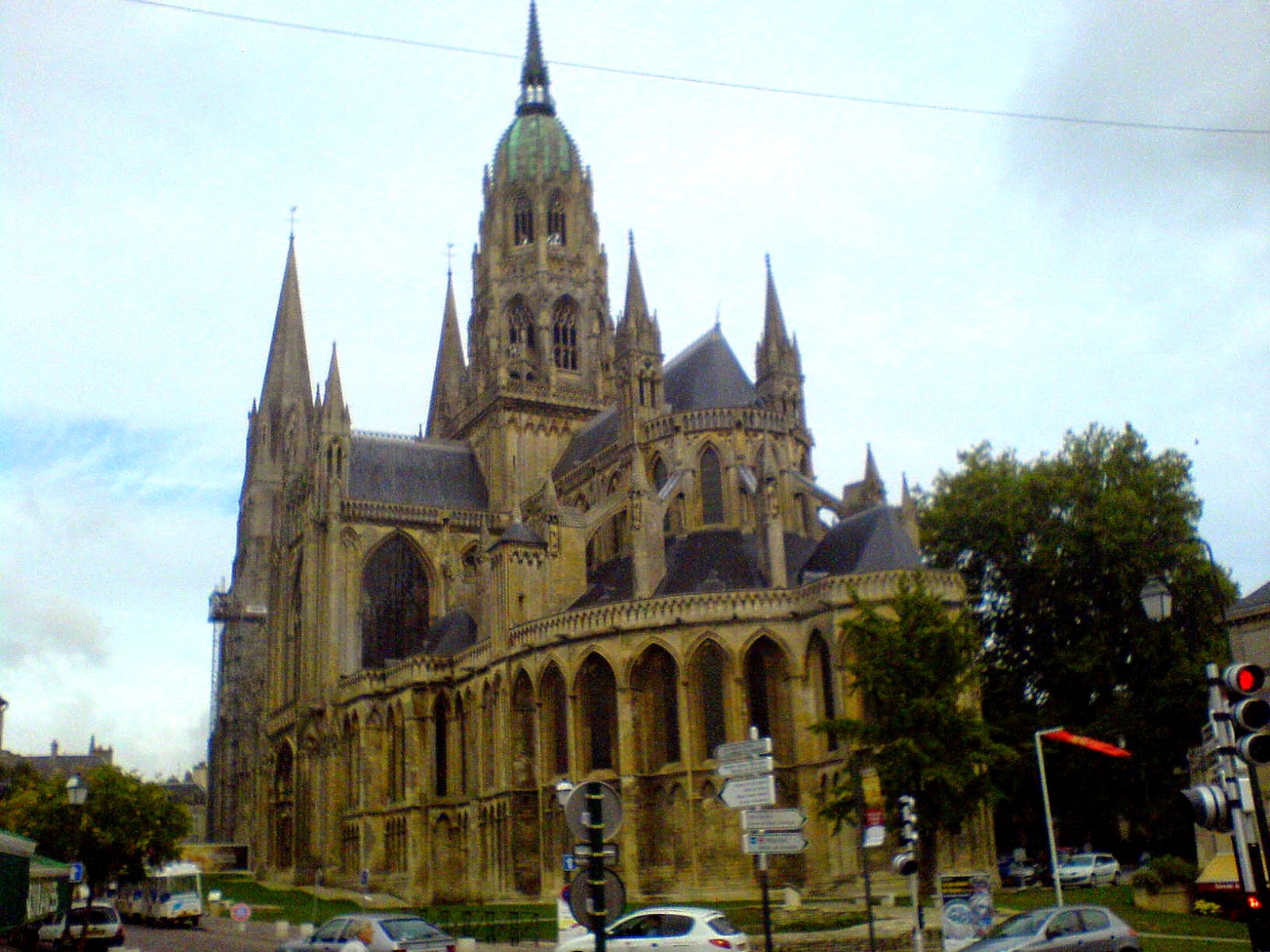 It truly was a beautiful place. Inside there were tombs of Saints and remarkable paintings. 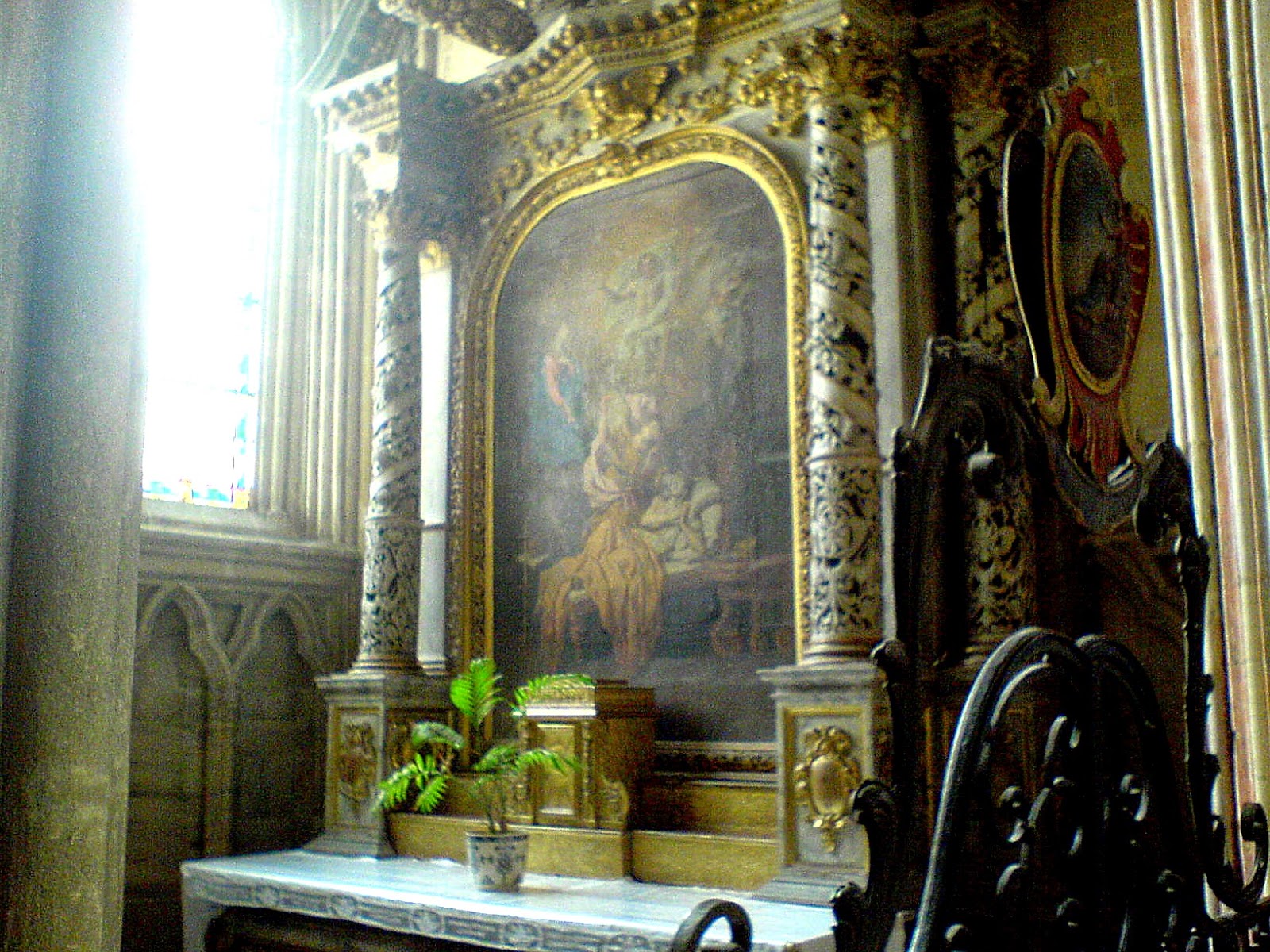 Then a strange coincidence closed to my eyes. I noticed a little plaque in a corner as my footsteps echoed on the stone floor. It was dedicated to an American called, Captain A. Peter Dewey. 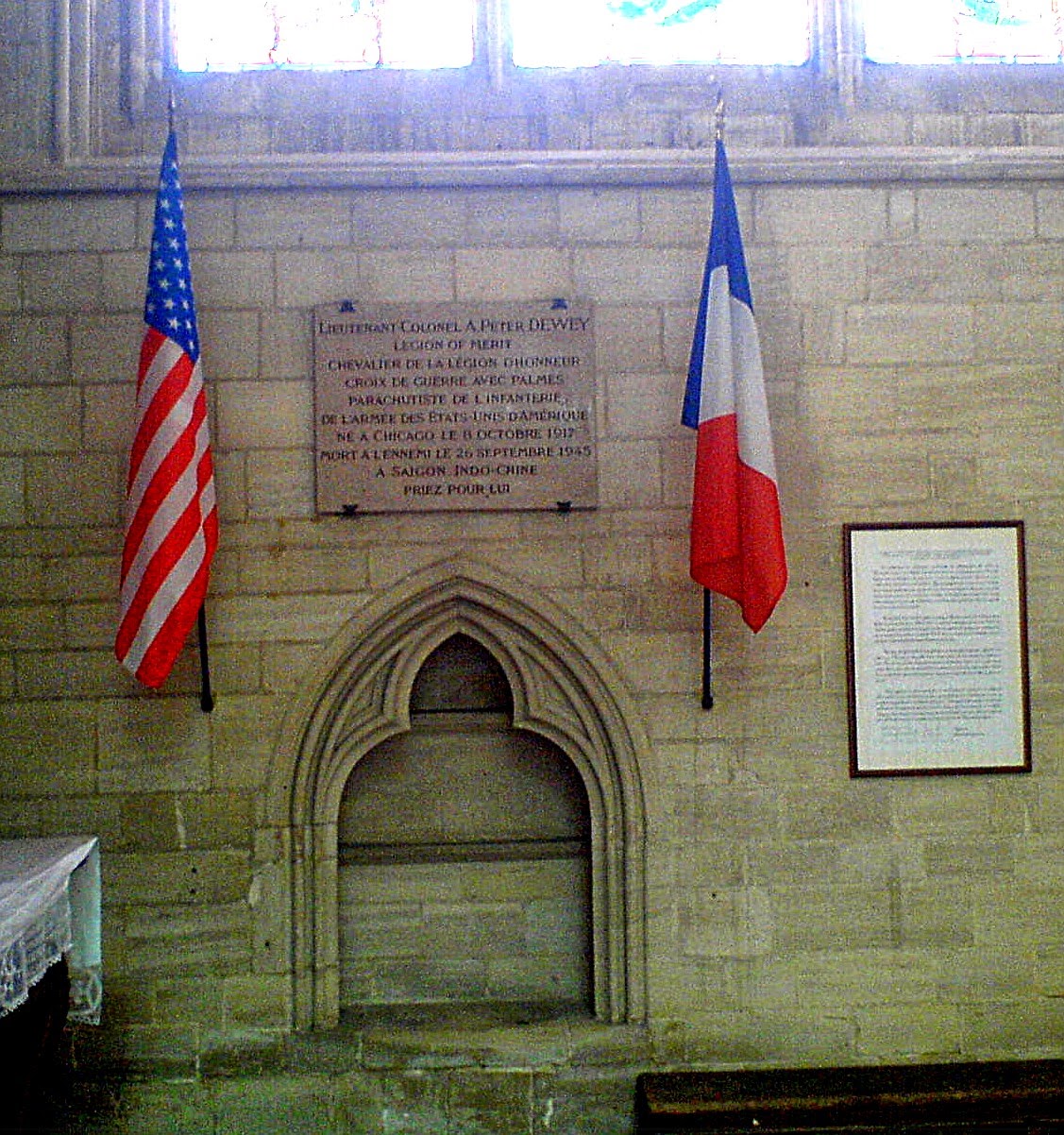 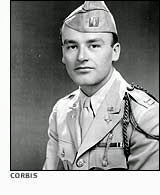 He was the first American to be killed in Vietnam (French Indochina) as it was called at the time in 1945. He had been accidentally shot by the Viet Minh. It was very poignant as my book, 'Slaves To The Generals' is partly about that time period.

Later, I went to one of the Normandy beaches where the Allies launched 'Operation Overlord' against the Germans in 1944. You can see in the bay the wrecks of sunken landing craft and the rock barrier defenses put up by the Germans. I then went further inland and saw one of the main battlefields where the German gun emplacements - encased in concrete - and some blown to smithereens by Allied planes or artillery lay like empty tombs. 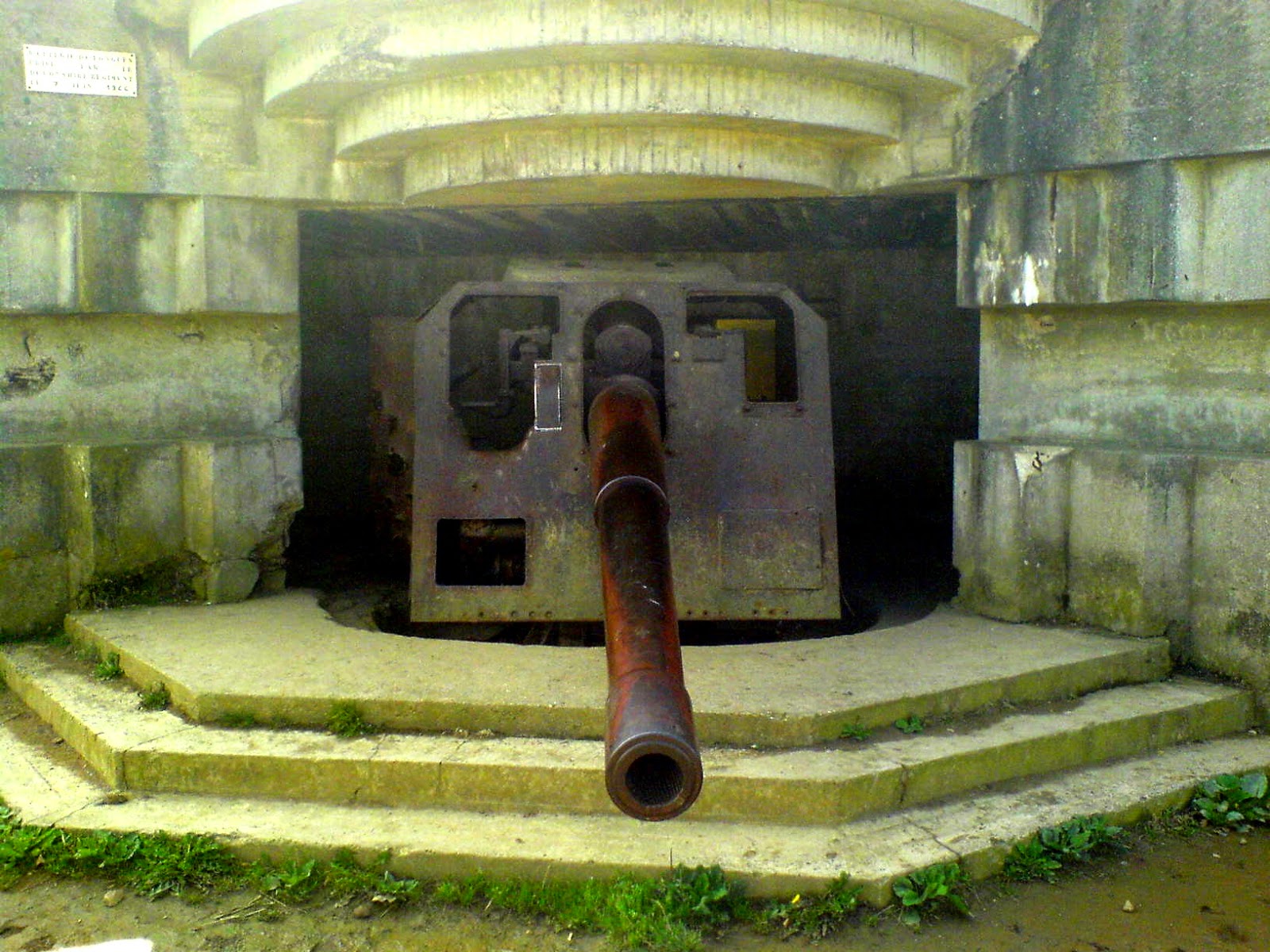 It certainly was an eye-opening experience about the enormity of war that occurred all them years ago.

Posted by Nathan Toulane at 15:47 No comments: Links to this post

Flight To Mars And Documentary Pitch

I came across this interesting opportunity while checking NASA website. Consequently, seeing I've always had a sense of the Victorian adventure in me - and that being said, H.G Wells is one of my favorite visionaries I decided sign up my name for NASA forthcoming trip for Mars: launch date December 2014.

I know it may only be a trophy gimmick to some, but it is still good fun to get involved with and my boarding pass link is underneath.


Now onto other things more serious. I am in the process of putting some ideas across to producers about getting some kind of documentary made about the 'Temptation of Christ'. As this figures greatly in my last novel 'The Ring In The Glass'.

I personally would like to do some filming around the area where this event is supposed to take place and to interview on camera various Academies and Theologians. It will be a tough pitch - but I will give it a try.

To be honest, I've decided to do this as I am really getting tired of seeing long bearded and straggly haired eccentrics on BBC Four and The Discovery Channel doing their usual monotonous routines about religion, history and ancient tribes when I could do the same thing.
Posted by Nathan Toulane at 11:16 No comments: Links to this post 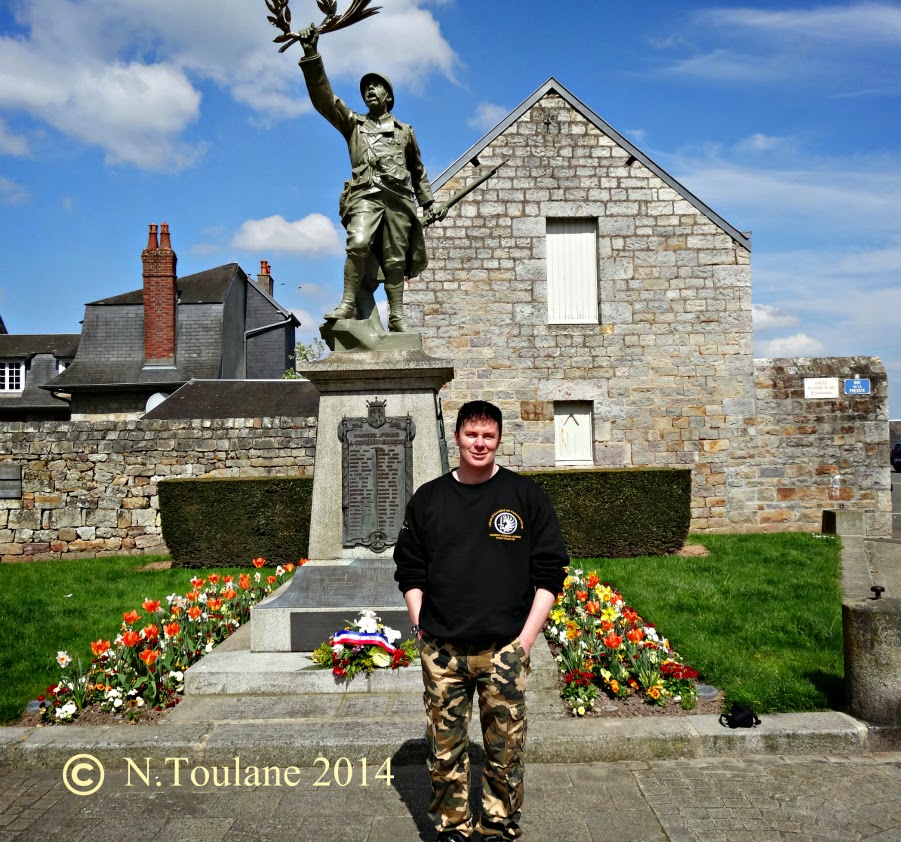 Above, me standing under a little war monument in Northern France 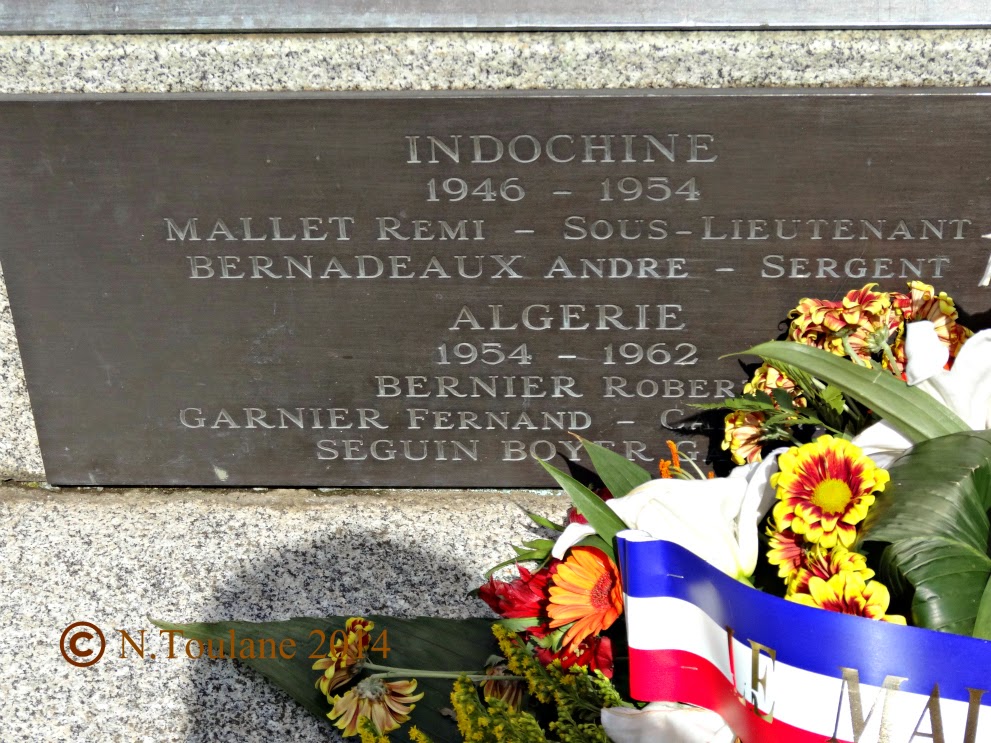 Well it is truly hard to believe that the Battle of 'Dien Bien Phu' happened over sixty years ago on May the 7th 1954. It was a time of great change in the world. The 1950s saw a lot of the colonial powers losing their prize bounties of their former colonies. Be it with the British in India, or the French in North Africa - and not forgetting the French's prized possession of Indochina: Now known today as the countries of Vietnam, Laos and Cambodia.

I think back to when I wrote my novel 'Slaves To The Generals' a few years ago - and on how - I tried to emphasize the feelings and the momentum which caused the French to lose Indochina.
The events and turmoil that surrounded the citizens and colonial forces caught up amongst this dark franchise of an episode before and during the Battle of 'Dien Bien Phu' was a nightmare of epic proportions.

'Dien Bien Phu' was in truth a hopeless proposition to undertake. The 'battle plan' was flawed, and 'its' whole goal to defeat the Viet Minh in one final throw of the dice descended into a bloody fiasco and a cataclysmic defeat for the French Expeditionary Forces.

While I was in France a few days ago, I found a little War Memorial with some of the names of the fallen from the Indochinese Campaign. I took a couple of photos of the monument and it really reinforced to me, that in retrospect, all the 'brave souls' who die in battle only end up 'marked' with a 'name mention' on a slab of marble, or engraved on a slab of brightened stone. No matter if the 'cause' they fought for was deemed for the good or for the bad.

We are all supposed to be celebrating the anniversary of the First World War in the summer of 2014,
but in essence there is nothing worth remembering: All fucking War Sucks!!!


Posted by Nathan Toulane at 15:56 No comments: Links to this post

Took this snap outside Canterbury Cathedral last night. All I needed was an actor dressed as a 'Exorcist' to stand in silhouette under the Catherdral's Streetlamp.

The scene is imperative to the ending from my book 'The Ring In The Glass'. 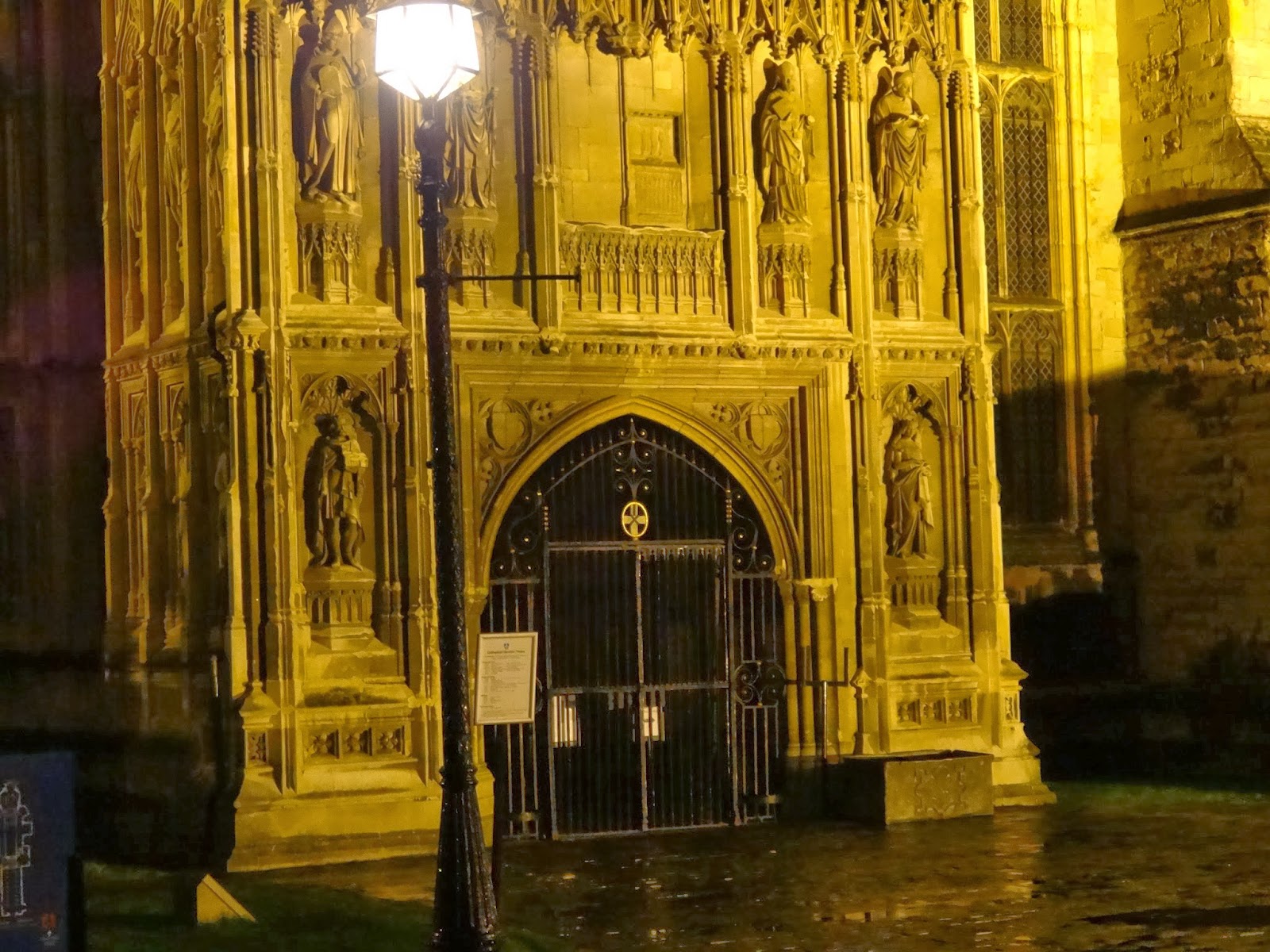