THE PAINTING By Nathan Toulane 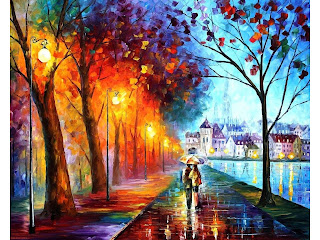 On the whitewashed wall it hangs. Overlooking my bedside. Warm. Mystifying. Season a plenty.
A red dressed girl hugs a man close. Painted in the watercolour pose. Warm lips touching her man’s shoulder. Caressing each other in a vicelike grip of passion. Arms tight. Eyes inflamed.
A red umbrella, pretty in colour, rests on the lady’s shoulder, while the rain sprays down from the moving grey clouds above, which watch in the sky like giant grey ghosts. Expanding. Floating. They’ve seen many an embrace, and could tell many a secret, of events they’ve observed, over the aeons of time and space.
Frisky flies flick up from the grass as another lady walks along the park. And dark auburn leaves spiral around the air behind her like a cloak—a cloak touched with secrets. Spellbinding. Mischievous. Passionate.
The puddles on the ground ripple outwards, while leaves and twigs float upon them—then cats meow in the distance, hiding near logs, waiting for scampering mice, which bite when touched or knocked.
The silhouette of three people stand to the left. Yellow umbrellas hang over their damp brows. In dark shades of grey—they come, approaching in the distance, while the bushes and trees in the yonder sway from side to side behind them, as if listening to a fateful tune of dying love.
I notice streetlamps glow amber behind the waterlogged street in my ‘painting.’ And rivers stream with mud, beneath the light stoned bridge, built beautifully in Norman times, by a randy Saxon Saint.
Green and black ducks on the bank waddle in single file, like soldiers off to a fight. And a park bench remains empty—say for a few tiny birds, nestled on its curved metal arms. They cheep and sing like nightingales, calling for ‘mates,’ to join them in song, so they can greet each other and belong.
His arm is around her waist, his mouth upon her lips, his eyes are closed, and his embrace with the lady brief.
Dancing dogs chase sticks near the river, and a lonely log rests beside a bare tree. While bouncing balls from kids in the park, vibrate the ground and disturb me.
Shades of paint have brought this picture alive to me, my senses brought into its world. Wanting me to be amongst its all-consuming array, of people enjoying themselves.

Posted by Nathan Toulane at 13:27 No comments: Links to this post