With the release of the movie 'The Lost City of Z' documenting the adventures of Colonel Percy Fawcett. Here is a piece I wrote, back in 2004, about his life.


Who Was Colonel Percy Fawcett? 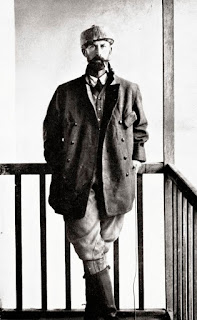 Fawcett was born in England in 1867. He enlisted in the British army in his youth and served in various countries. Fawcett always had an interest in the paranormal, and read a number of occultist magazines.
Shortly after the end of World War I he read a report of a 1753 expedition, which had gone into the jungle of the Amazonian Rainforests, looking for a secret city that was supposed to hold many amazing treasures. The advanced civilization were said to be highly intelligent, and may have even been descendents from the lost city of Atlantis. This story fascinated him, and the mystique and secrecy appealed to his adventurous nature. In 1925, he made arrangements for an expedition into the South American jungle to bring proof back to the outside world - of this mysterious civilization.
Fawcett and his party were poorly supplied when they entered into the Amazon basin, they headed north to Baccari, and then further east, making camp at a spot called, ‘Dead Horse Camp.’ The Colonel made an average entry in his diary about eating, and the bothersome insects. This was his last message to the outside world, as neither him nor his party would ever to be seen again. Because he was not supposed to return until 1927, no undue concern was expressed.
In 1928, an expedition party from the USA led by George Dyott, set off in search of the Fawcett mission. They got to ‘Dead Horse Camp’ and met some local Indians, who gave a rather whimsical story that the Colonel had gone further into the jungle. Dyott seemed convinced that Colonel Fawcett and his researchers had fallen prey to vicious Indians.
It was nearly twenty years later that Edmar Morel went into the Amazon to see what really had happened to Fawcett. After two days he encountered the Kalapolo tribe about nine miles from 'Dead Horse Camp.' Morel managed to extract a confession from the Kalapolo chief who admitted the Colonel and his party had been speared to death, some remains were given to the party to provide proof of the story. A few months later Morel managed to get the remains examined by a pathologist in London. The pathologist compared them with the Colonel’s medical details, and found them not be Fawcett’s.
Maybe the final conclusion to the story may lie with the well-known medium Mrs. Nell Montague. In 1951 some family relatives handed her a scarf worn by the Colonel. Using psychometry she immediately had a trance vision of Fawcett and the party being savagely attacked and killed, then their bodies being thrown into a lake.

A book published by Fawcett’s son in 1955 called Exploration Fawcett, was a detailed collection of his father's notes and stories.

A stage play was made about Fawcett by Misha Williams, a director and writer, called AmaZonia, and staged in the West End in London, he had access to many secret papers held by the Fawcett family, and even himself went to the spot where the Colonel was last seen.
I have always found the story about Fawcett intriguing, even though it is irrelevant to The Electronic Voice Phenomenon, a science I used in one of my novels, where the voices of ghosts communicate through electronic equipment.
Perhaps though, someone could've obtained an EVP message after going into the Amazon jungle armed with only a tape recorder, for only then, to disappear like the Colonel.
By the way that idea has been copyrighted!
Recommended reading:
Cummings. G. The Fate of Colonel Fawcett
(Aquarius Press, London 1954)